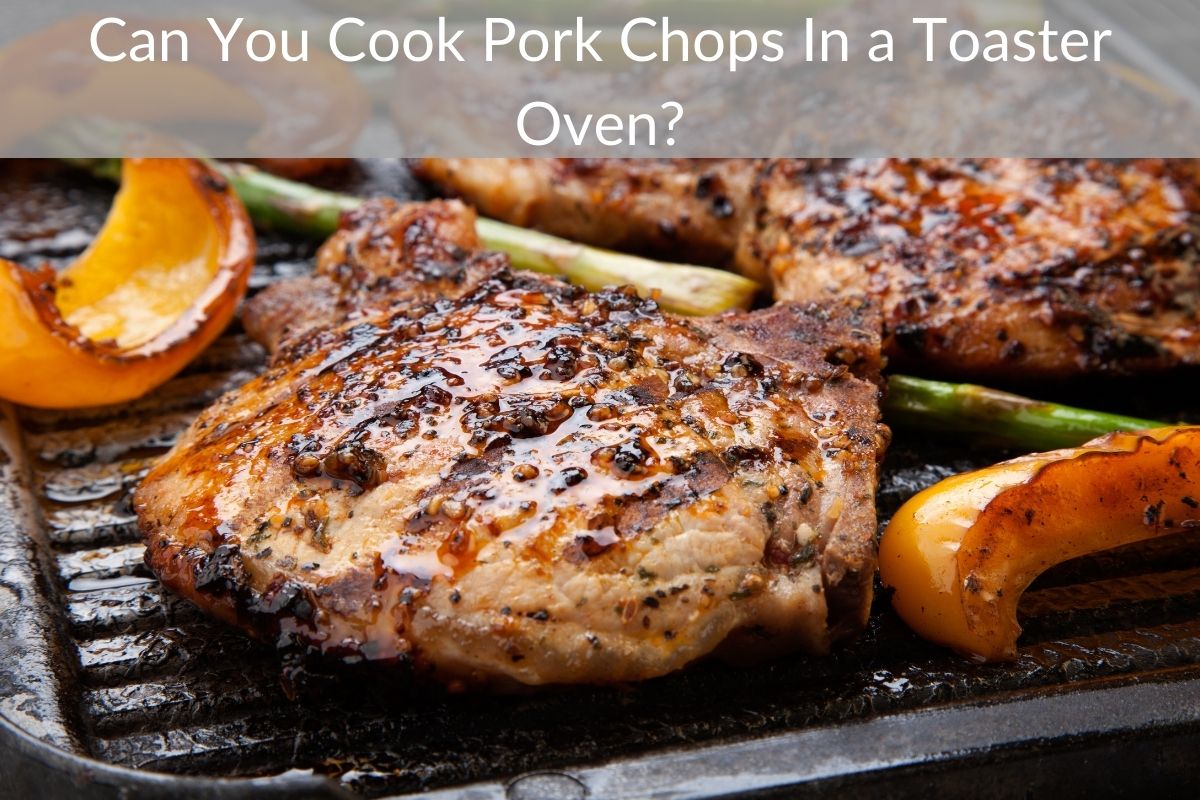 Toaster ovens can cook food in multiple ways. If you are planning on making some pork chops for dinner and only need to make a few, you may turn to your toaster oven for the task.

But, can you actually cook pork chops in a toaster oven?

You can cook pork chops in a toaster oven. If you are only cooking a small amount then this appliance is great to use. Since a toaster oven heats up faster than a regular oven you can have a delicious dinner sooner.

Toaster ovens are small appliances and so only a small amount of food can be cooked in one at a time. This is perfect for singles or college dorm rooms.

Or maybe you just don’t want to use your oven. It could be a hot summer day and heating up the oven is something you don’t want to do. Or you don’t need to wait for the oven to heat up. Whatever the case may be, you can use a toaster oven to cook all kinds of food. This convenient appliance can bake, broil, toast, and reheat. Are pork chops on the menu for dinner? If you are wanting to try to cook them in a toaster oven you can!

The three most popular kids of toaster ovens are:

Can You Bake/Broil Pork Chops In A Toaster Oven?

A toaster oven can be used for different types of cooking. You can reheat, toast, bake, and broil in one of these small, compact kitchen appliances. Anything you can do in a standard oven can be done in a toaster oven, too.

So, can you bake/broil pork chops in a toaster oven?

If you want to fix some pork chops without using your standard oven, you can use a toaster oven. This can be done on the bake or broil setting of the appliance. Keep in mind that on the broil setting you can only do one or two pork chops at a time.

It’s a good idea to check what the proper temperature to set it at is and how long to cook the pork chops in a toaster oven. This can vary from how long you would cook them in a regular oven. Sometimes toaster ovens have a difficult time heating food thoroughly and you will need to check on the food periodically.

When cooking pork chops, you want them to turn out juicy instead of dry so it is a good idea to check on them when cooking them in a toaster oven. Once they reach an internal temperature of 145 F they are ready to be served.

How Long Does It Take To Cook Pork Chops In A Convection Oven (Toaster Oven)?

The difference is that a toaster oven takes less time to heat up. So, you can get to cooking the pork chops sooner and they can be done quicker than if you were using a standard oven. So, how long does it take to cook pork chops in a convection oven or toaster oven?

Also, the higher you set the temperature of the toaster oven, the less time it will take to cook. Although when you cook meat for longer at a lower temp it generally turns out more juicy. But, using a toaster oven can be a great way to get a few pork chops cooked quickly.

Here is a list of how long it will take to bake pork chops in a standard oven according to what temperature you set the appliance to:

A toaster oven usually cooks food faster than an oven does because its heating elements are closer to the food than that of a regular oven. So, the amount of time will vary but will be roughly around the same as when cooking pork chops in an oven.

For example, if you set the toaster oven to a temperature of 375 F then it will take about 40 minutes to cook. It’s important to check on the pork chops to see if the juices are clear and no longer pink and have a thermometer on hand to check for an internal temperature of 145 F.

The outside of the pork chops will be a nice golden brown. Then they are ready to eat!

If you are cooking pork chops for dinner and want to use your toaster oven, you can! Pork chops can be baked or broiled in one of these small and convenient kitchen appliances.

Toaster ovens heat up faster than a standard oven and so you can enjoy your pork chop dinner sooner.