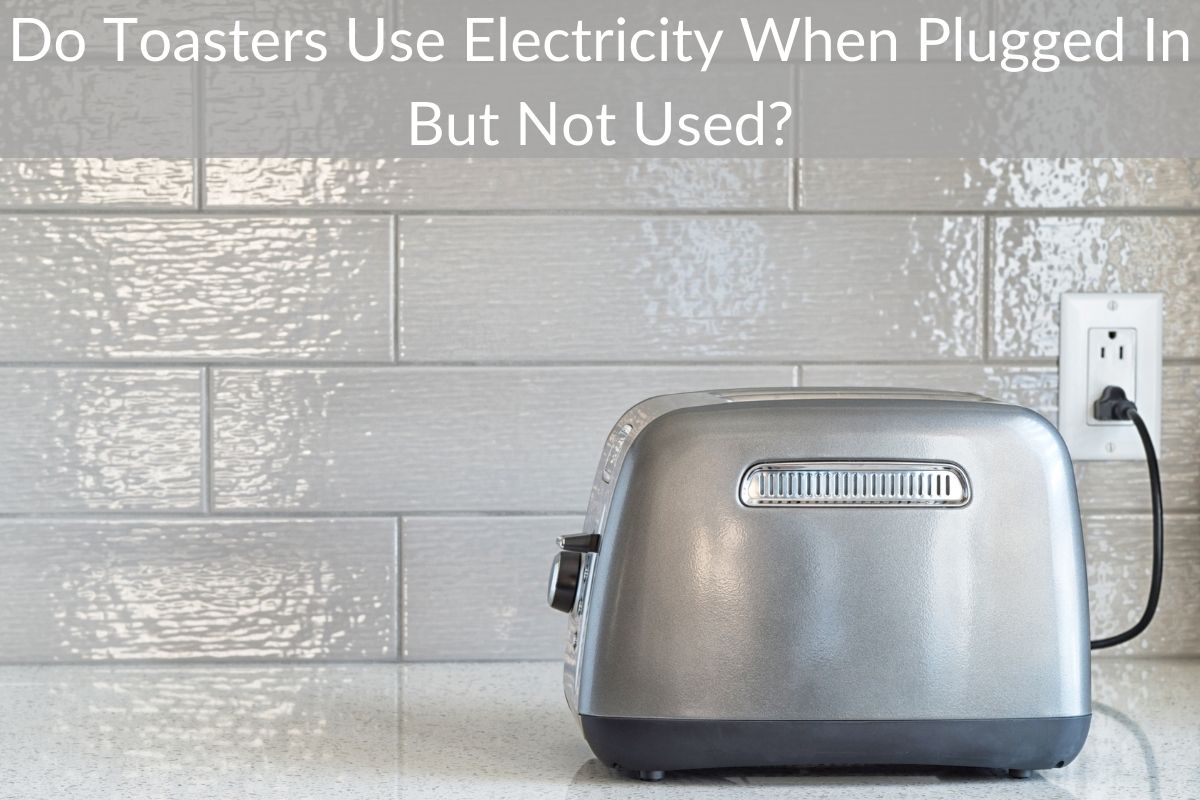 Electricity powers many appliances in our homes. Without it, we wouldn’t be able to cook (unless you have a gas stove of course), keep food cold, or even use the dishwasher. A toaster is one thing that uses electricity to heat up and toast slices of bread.

But what about when they aren’t being used? Many times, we just keep some things plugged in thinking they are fine since they aren’t on. But, are they?

Do toasters use electricity when plugged in but not in use?

Toasters do use electricity when they are plugged in but not being used. Even though these appliances are turned off, they can still be using energy. Although a toaster will only use a small amount of electricity when not in use, It is a good idea to always unplug a toaster as it can save you a few cents a day.

According to the article, PHANTOM ENERGY LOAD, “This phenomenon is commonly referred to as a “phantom load” or “vampire energy.” A phantom load is any electronic device or appliance that consumes electricity when turned off but still plugged into an outlet. These appliances and electronic devices provide the modern-day conveniences we rely on, but they also waste energy and cost money. The U.S. Department of Energy says on average, 75 percent of the electricity used to power home electronics and appliances is consumed while the products are turned off.”

Phantom energy load happens when an appliance is plugged in, turned off, and still using energy. Most of the ones that use a lot of electricity in this situation are electronics like TVs, DVD players, computers, monitors, power strips, etc. Kitchen appliances can also be using energy when not in use but plugged in like microwaves, coffee machines, toasters. etc.

Chargers are a big culprit of this as they can be drawing energy when left plugged into the outlet but not in use.

Electricity powered appliances in your home can still be using energy even when they aren’t being used. Things like electronics, office equipment, kitchen appliances, and chargers can still be drawing power when they are plugged in even though you may not be using them.

Unplugging things around your home can make your utility bill cheaper in the long run.

Now, some things are okay to leave plugged in because who really wants to go around unplugging everything all the time? I mean, because then you will have to plug it back in to use it. So as for those things you use constantly, well, they can stay plugged in.

Small devices, like a toaster, don’t really use a lot of energy so if you happen to leave them plugged in, it is fine. Still, it’s good to know that a toaster could be using some electricity when it is plugged in so it is always best to unplug it when you aren’t toasting some bread.

To see the most popular toasters just click here.

Do Electrical Outlets Use Power When Nothing Is Plugged In?

Electricity is a great discovery that is now incorporated in all of our homes. It powers our lights as well as other appliances that make our lives more comfortable. We know that when something is plugged into an outlet it could still be using electricity but do electrical outlets use power when nothing is plugged into them?

If you do have something plugged in but it is turned off, this can still result in power usage. Some energy may be drawn by the appliance. This happens more often in larger devices or ones that draw more energy such as electronics, lighting, etc.

Smaller devices should be okay to leave plugged in when you aren’t using them. A toaster is one of these. However, it could still be using some electricity. Plus, it is a good idea to unplug anything you don’t use often.

A toaster probably should stay unplugged because you don’t use it as often as you do a TV. But, in answer to our earlier question, no, electoral outlets don’t use power when nothing is plugged into them.

Why Is It Important To Switch Off Appliances At Home When They Are Not In Use?

So, some appliances can stay plugged in and not be using any electricity. But, would you leave them plugged in? You may have heard some people say to unplug anything not in use, and while this can be inconvenient for many household appliances, others that aren’t used as often should be unplugged.

But why is it important to unplug appliances at home when they are not in use?

It is important to switch off and unplug appliances at home when they aren’t in use because they could fail and start a fire. Appliances that are turned off but still plugged in should be turned off to avoid a dangerous situation. These unused appliances will also still draw electricity so you can save yourself a few dollars a month by unplugging things that aren’t in use.

You shouldn’t leave any appliances or electrical devices on when you aren’t using them. This can be dangerous. The appliances will be hot when in use and if it malfunctions, could start a fire. It is a good idea to also unplug any devices even if they are switched off.

This can help to prevent high energy bills, fires, as well as shocking someone. An unplugged appliance doesn’t have any electricity flowing to it and so it cannot do any of these.

So, it is important to switch off and unplug certain appliances at home to avoid danger.

A toaster can still be using electricity when it is plugged in even though it isn’t being used. This is because there is still a small amount of energy flowing to the appliance.

Electrical outlets that don’t have anything plugged into it don’t use any electricity because nothing is drawing power from it.

It is important to switch off devices if they are not in use. Although you can leave some things plugged in but turned off, It is best to turn it off to avoid certain situations such as high energy bills, fires, or shocking someone.

Still, you should unplug anything that isn’t being used a lot because it could be using power for no reason. A toaster is a small appliance and won’t use a lot of energy when it is plugged in but not being used but it will still use some electricity.