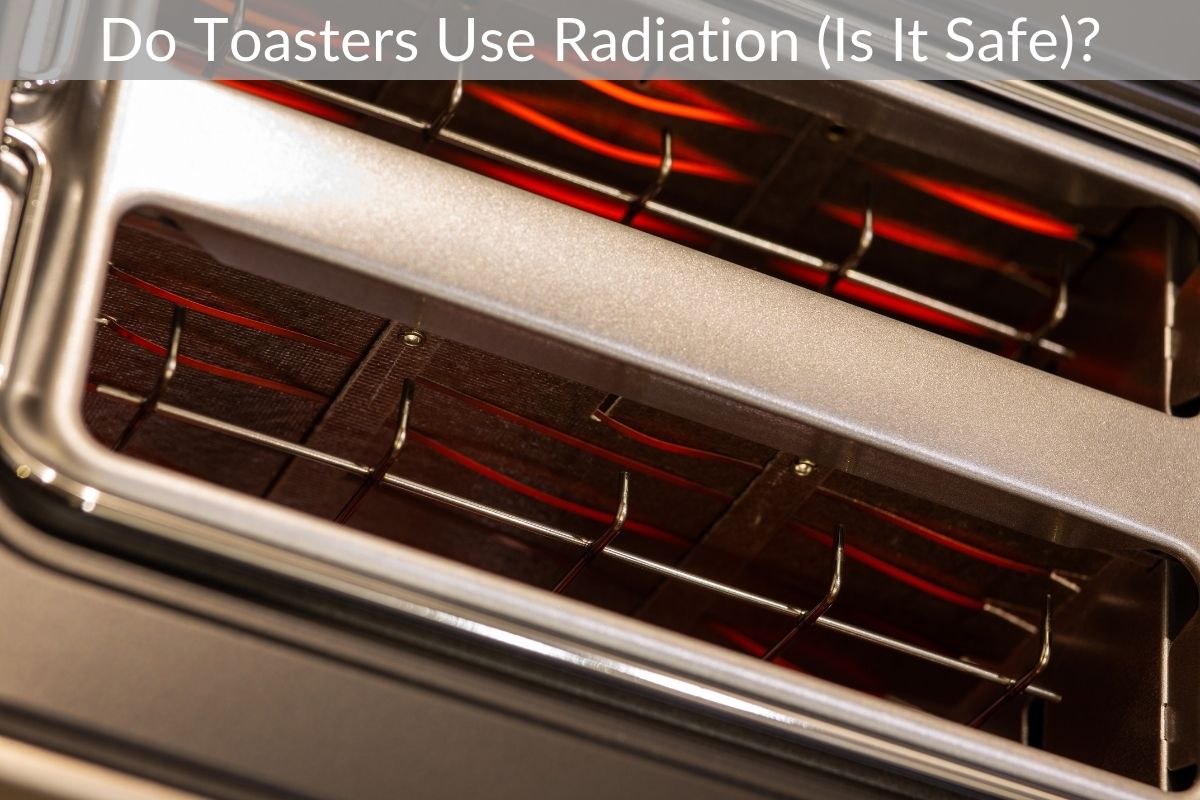 Toasters are one of those handy kitchen appliances that toast bread. You then can eat this toasted bread by spreading jam or butter on it for a breakfast or snack. Or you can use the toast for a sandwich.

Toasters are easy and convenient to use and make our lives just a little easier. In no time you can get quickly toasted bread. But, you may be wondering, do toasters use radiation and if so, is it safe?

Toasters do use radiation. They are built with infrared radiation that heats the food up. The infrared rays produce electromagnetic radiation. This radiation isn’t usually harmful, making it safe to use a toaster.

You will want to make sure to always use a toaster correctly. Never put anything inside of a toaster except for the bread that you are toasting. You should also clean it out regularly to avoid leftover crumbs catching on fire.

If you notice anything strange like smoke coming from the toaster or a strange smell or the toaster not working right, unplug it and contact the manufacturer or replace it with a new toaster.

A toaster’s radiation is a concern to some but it is safe to use a toaster even though it does produce radiation. Along with many other components, toasters are made of nichrome which is an alloy of nickel, chromium, and iron.

This mineral combination is able to handle high heat and temperatures, it is the perfect thing to use to build toasters. Toasters are meant to be heated to a high temp so that they can toast bread well. The heat that toasters use to operate comes from infrared radiation. This heats the food and dries it up resulting in toasted bread.

Toasters have a metallic coil with resistance to electricity. Electricity passes through the metallic coils and heat is produced. The heat is radiated in the form of infrared waves which make electromagnetic radiation. This radiation is only harmful if you are exposed to a great deal of it.

Because of this, it is best to stand back from the toaster when it is toasting your bread. So, yes toasters do produce radiation but no, that radiation is not harmful to you or anyone in your home.

To see the most popular toasters just click here.

Just like many other kitchen appliances such as toaster ovens and microwaves, toasters also put off infrared radiation to heat up food. This radiation is only harmful if you come directly into contact with it on a consistent basis.

So, is a toaster’s radiation harmful?

The radiation a toaster uses is infrared radiation. This is used to heat food and since it is only a small amount it isn’t generally harmful. Still, it is a good idea to keep a safe distance from the appliance when it is cooking your food.

Radiation is never safe to come into contact with regularly. A toaster uses radiation in order to heat although only a small amount. If you are using a toaster try to stand back from it so you aren’t exposed to a lot of the radiation.

Toasters use radiation to heat and toast your bread so that you can have a yummy breakfast. But, we have all heard that radiation is harmful if you come into contact with a lot of it.

Some even say it may cause cancer. Does that mean toasters are cancerous?

Though still being studied, it’s important to be careful when using a toaster since it puts off radiation. On a good note, a toaster is a small appliance and only puts off a small amount of radiation so it shouldn’t be an issue for a normal household who uses their toaster as the manual says to.

Is It Safe To Use A Toaster?

Toasters are a convenient kitchen appliance. It’s easy to pop a piece of bread in one and wait for it to pop up so we can slather jam on it for a yummy snack.

Since we’ve been discussing a toaster’s radiation, you may be wondering how safe they are to use. Is it safe to use a toaster?

As of right now, the radiation from toaster isn’t anything to worry about as long as you keep your distance when toasting your bread. A toaster is safe to use if you are using it correctly. It only puts off a small amount of radiation.

So, yes, it is safe to use a toaster when it is being used properly.

Does A Toaster Oven Put Off Radiation?

So, unless you are hovering above the toaster every time it cooks and coming into direct contact with the radiation, you won’t be harmed by it. We all have convenient kitchen appliances like toasters, microwaves and even toaster ovens. So, does a toaster oven put off radiation, too?

Toaster ovens do put off small amounts of radiation just like microwaves, toasters, and many of our electronics. The radiation put off by a toaster oven should not be of any health concern to you.

The same concept of radiation we have explained being used in a toaster can be applied to a toaster oven as well. Just like a microwave does, a toaster oven heats up food and cooks it quickly for you to enjoy.

Toasters along with kitchen appliances such as toaster ovens and microwaves also produce radiation. This is why it is said that you should stand away from a microwave when it’s in use and not stand directly in front of it.

As we conclude, let’s go over some things we have learned. Toasters do use radiation in order to work. Infrared radiation is put off as the appliance toasts your bread. Some people think a toaster’s radiation is cancerous however, no tests or studies that have been done back this up.

If you are concerned it would be best for you  to stay away from your toaster, toaster oven, or microwave while it is heating.

The radiation from these small appliances isn’t harmful but just like with any radiation, it is a good idea not to come into contact with a lot of it. So, a toaster does use rotation to heat up and toast bread and although you should avoid coming into direct contact with it, a toaster is safe to use.