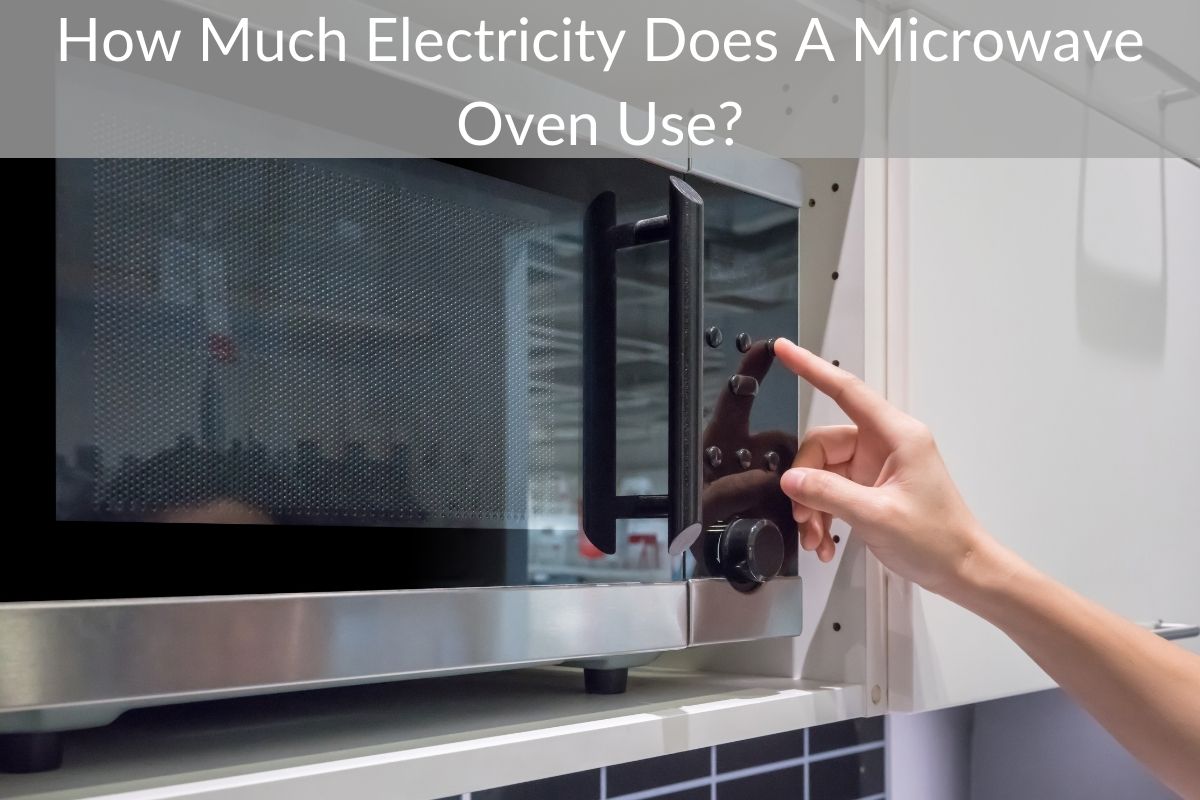 A microwave oven, or commonly known as just a microwave, is a machine used to heat up food. More than likely you have one of these convenient tools in your kitchen so you can pop some leftovers in to reheat it in minutes.

Now for our question, how much electricity does a  microwave oven use?

An average microwave oven uses around 1200 watts per hour of use. Microwave’s wattage varies with some lower and some higher. Since it is only used for short periods at a time, a microwave doesn’t end up using very much electricity at all over the course of a day/week/month.

If you have a 1200 watt microwave and use it for a combined average of 30 minutes over the course of the day you will use approximately 18kwh in a month. At the average cost of .12 per kwh your microwave will cost you $2.16 a month to operate.

Most households feature a microwave. It is that square-shaped appliance with number buttons and a door that swings open. Inside the microwave is a rotating plate where the food is set and turned for heating thoroughly. A microwave is fast at heating food up so you can enjoy meals quicker and easier than if you would use an oven.

Microwaves use a form of electromagnetic radiation for this purpose. Inside the microwave is a device called a magnetron. This device produces microwaves. Then microwaves reflect off the metal interior of the oven causing water molecules in food to vibrate.

This vibration then results in friction between molecules and produces heat, this heat then cooks the food.

Wattage is the method of measuring the rate of energy transfer of an appliance. A normal microwave wattage ranges anywhere from 500 to 1500 watts depending on the microwave. If this appliance was constantly going it would be using a lot of electricity. But, microwaves are only used for a few seconds or minutes at a time so the electricity use is relatively small.

The main purpose of a microwave is to heat up food and it does its job quickly. So, if your microwave is using 1200 watts but you only use it for a couple minutes each day then it isn’t using a lot of electricity. If you use your microwave for 15 minutes a day it only amounts to about $13 per year in electricity costs.

This means your electricity bill will be quite low for this appliance. As you can see, generally speaking, microwaves don’t use a lot of electricity with an average of 1200 watts.

To see the most popular microwaves just click here.

Is It Cheaper To Run A Microwave Or An Oven?

All appliances use some type of power in order to work. Electricity is a main source of this power for many kitchen items. A microwave and oven can both heat food up but is it cheaper to run one or the other?

According to the article, Energy-efficient cooking, “You might not necessarily consider the impact that being energy-efficient in the kitchen can have on the bills you pay. Like everything related to using energy, though, the more energy-efficient you are in the kitchen can have a significant impact on keeping your bills down. This basically comes down to the food you’re cooking and the way you’re cooking it, but you don’t necessarily need to invest in a state-of-the-art low-energy-using oven to improve the energy efficiency of your kitchen. Being more mindful of your cooking processes can significantly reduce the amount of energy you use and cut your energy bills in the process.”

So, being aware of how long you are using an appliance can help you save money on your electricity bill. An oven is a versatile appliance that is used in many cooking methods while a microwave can heat up food quickly but not really cook it.

That is why both of these are usually found in kitchens because they are both convenient appliances but used for different things.

A microwave is used for fast heating and it is small. If it is run for about 15 to 30 minutes per day and uses 1200 watts per hour then it will only cost between $13-$25 per year.  It uses less electricity than an oven and so it is cheaper to run a microwave.

What Uses The Most House Electricity?

So, a microwave is near the bottom of this list because it is only used for short periods at a time and is a small appliance. Bigger appliances that run for longer will use more electricity in your household.

So, what uses the most electricity for the average house?

Household appliances that use the most electricity are air conditioning and heat, water heating, large appliances (like refrigerators, freezers, washers, and dryers), lighting, and TV and media. All of these in your home use a lot of power and when used often can make your energy bill soar.

Let’s start with air conditioning and heating. Out of all the things in your home, your HVAC system uses the most electricity. To save on money, you can only turn it on when it is absolutely needed.

Then there’s the water heater. This can make your showers hot but by turning down the temperature of the water, you can avoid unnecessary high electric (or gas) bills.

Along with lighting and television, large appliances use a lot of electricity. Your refrigerator, washer and dryer, electric oven and stove, and dishwasher all account for using a lot of your home’s electricity. Although you have to use these all the time, you can cut down on its power usage if you follow some of the below helpful tips.

Green Logic Energy states that, “Home appliances account for about 13% of an average home’s energy consumption…” They continue to give some tips on how to use less of this energy used by oven and stoves by saying,

“…Electric Oven and Stove…At 2,500 watts for an oven and 1,500 for a stove on medium-high heat, using these for one hour a day results in 75 kWh and 45 kWh a month, respectively. These appliances, particularly your oven, can also make your home warmer and increase the load on your AC. Reduce the electricity load from these appliances with these tips:

A microwave oven doesn’t use that much electricity. It averages at about 1200 watts which results in a little over $13 to use it everyday for a year when used for an average of 15 minutes a day. When compared to an oven, a microwave is the cheaper option.

But, an oven is used more often and a microwave is used for a shorter amount of time and is used primarily for heating up food.

Air conditioning and heating uses the most electricity in your home followed by other large appliances. A microwave is not on this list since it doesn’t use that much electricity.

So, in answer to the question, how much electricity does a microwave use, it uses an average of 1200 watts per hour of use, so in the grand scheme of things not very much electricity since it is only used for a few seconds or minutes at a time.

link to Are Toaster Ovens Good For Toast?

There are so many convenient kitchen appliances available to us. We have a refrigerator to keep food cold, an oven to cook food in, and a dishwasher to wash the dirty dishes we use. You can just pop...

Continue Reading
link to How Much Electricity Does An Oven Use?

Electricity is an amazing source of power. It is a form of energy that comes from charged particles. This flow of electrical power can then power appliances that are connected to it.  Many...