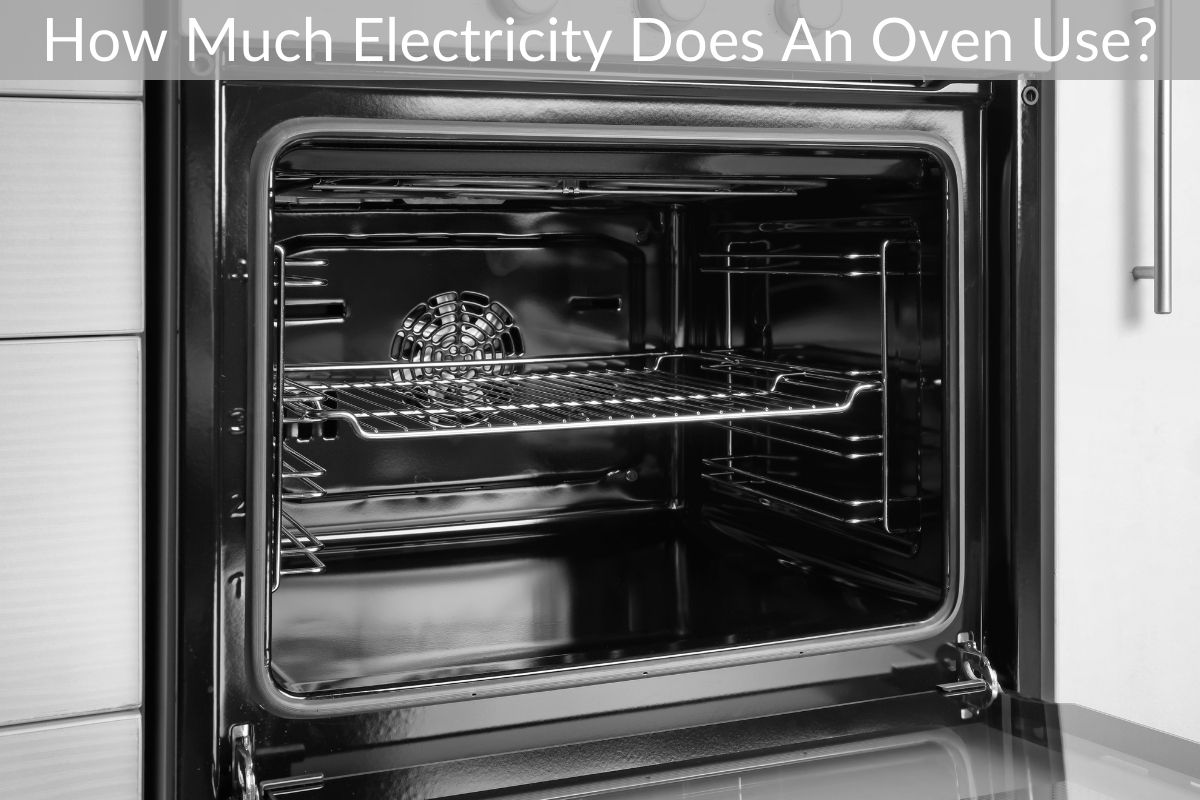 Electricity is an amazing source of power. It is a form of energy that comes from charged particles. This flow of electrical power can then power appliances that are connected to it.

Many household appliances use electricity for power. Some of these use more electricity than others. Larger appliances and ones that are used more often will use more and result in a higher electricity bill at the end of the month.

So, how much electricity does an oven use?

If on average you use your oven one hour a day and you average a usage of 3,000 watts an hour then you will spend about $10-$12 a month to power your oven (at an average of 10-12 cents per KWH). So although an oven does draw a lot of electricity, since it isn’t used throughout the day the monthly cost for its electricity is manageable.

Out of all the appliances in your kitchen, there are some that use more electricity than others. The refrigerator and dishwasher are a couple of high electric users as is the oven.

If your oven is larger in size and you use your oven often, you can expect it to use a lot of electricity. The average energy usage for ovens is around 3,000 watts. It could cost you around 60 dollars per year if you only use the oven for 3 hours per week.

So, how much electricity does an oven use? Well, a lot compared to other appliances in your home and more specifically around 2,000 to 5,000 watts per hour of use.

To save on electricity a lot of people will use a smaller toaster oven rather than having to heat the larger oven. To see the most popular toaster oven options and compare their electric use just click here.

How Much Electricity Does An Oven Use In An Hour?

Benjamin Franklin conducted extensive research of electricity and because of his efforts, we enjoy electricity in our homes today. Many things can be easily plugged into an outlet and voila! It is ready to use.

Electricity flows and powers the device so you are able to use it. Large kitchen appliances need electricity in order to function. An electric oven is one of them.

But, how much electricity on average does an oven use in an hour?

Electric ovens are a household appliance that uses a lot of electricity typically using about 2,000 to 5,000 watts in an hour. The average cost for power usage from an electric oven is about 10-15 cents per hour depending on where you live.

Now exactly how much you will spend on electricity all depends on if you have a larger or smaller oven and how often you use it. The bigger your oven is, the more electricity it is going to use because it has more to heat up.

The more often you use your oven, the more you are going to pay in electricity bills because you are using more energy. Still, you have to use your oven and really, the cost isn’t all that much.

Most people can afford to pay about 60 dollar a year to use their oven. But, if you are wondering how much electricity an oven uses, an oven averages around 3,000 watts per hour.

What Uses The Most Electricity In A Home?

Ovens are great to cook in. In fact, most if not all households use ovens on a daily basis. There are gas and electric ovens. Electric ovens are powered by electricity and need it in order to work.

An electric oven uses a lot of electricity but exactly how much depends on how big it is and how much it is used. Appliances that are bigger and run for longer will use more electricity in your household.

So, some things use more electricity than others. What uses the most electricity in a home?

Some things use more electricity than others. The household appliances that use the most electricity are air conditioning and heat, water heating, large appliances (such as an electric oven, fridge, and dishwasher), lighting, and TV and media.

Let’s begin by discussing air conditioning and heating. The HVAC system uses the most electricity in your home out of everything. If you want to save some money, you should only turn this on when it is absolutely needed like in the heat of summer or dead of winter.

Then we have the water heater that gives you hot showers. By turning down the temperature, you can avoid unnecessary high bills.

Lighting, television, and appliances also use a lot of electricity. Things like your refrigerator, washer and dryer, electric oven and stove, and dishwasher all account for using a lot of your home’s electricity.

Now, you have to use these all the time, but by following some helpful tips, you can cut down on electricity usage resulting in cheaper electricity bills.

An electric oven does use a lot of electricity in a home but what uses the most is the air conditioning and heating system. According to Green Logic Energy, “At 2,500 watts for an oven and 1,500 for a stove on medium-high heat, using these for one hour a day results in 75 kWh and 45 kWh a month, respectively. These appliances, particularly your oven, can also make your home warmer and increase the load on your AC. Reduce the electricity load from these appliances with these tips:

An oven uses about 2,000 to 5,000 watts of electricity every hour. This energy usage can vary according to the size of the appliance as well as how often it is used. It’s one of the household appliances that uses the most electricity.

When compared to the HVAC system which uses the most electricity in a home, an electric oven doesn’t use quite as much since it isn’t running constantly. The average electricity used by an oven is a lot and averages at about 3,000 watts.